After the campus experienced a series of hate crimes in November, more than 100 Syracuse University students, faculty and community members gathered at Hendricks Chapel on Wednesday to reflect.

They stood on the steps of Hendricks Chapel in attendance of the Community Peace Vigil. The vigil was meant to help overcome the hate and pain of at least 16 racist, anti-Semitic and bias-related incidents reported on or near SU from Nov. 7 to Nov. 21.

“Today, we gather because the past weeks have brought with them tremendous pain, followed by shock, grief, anger, fear and frustration,” said Brian Konkol, dean of Hendricks Chapel, in his opening statement. “We gather because we respect the concerns of our students, because our hearts are open to the commitments of this community.”

The series of racist incidents sparked the creation of the black student-led #NotAgainSU movement, which held a sit-in at the Barnes Center at The Arch for eight days. The protesters presented Chancellor Kent Syverud with a list of 19 demands to meet by Nov. 20. If Syverud did not agree to the demands by then, the movement said they would call for his resignation.

When Syverud declined to sign student demands at a Hendricks Chapel forum seven days into the sit-in, #NotAgainSU protesters walked out. The next morning, Syverud signed 16 of the protesters’ demands as written and recommended changes to the remaining three. #NotAgainSU continues to call for his resignation.

On Wednesday, two weeks after the protesters walked out of the chapel, Konkol called for attendees to reflect on the events that reached a fever-pitch on those same steps.

“Believe it or not, the clouds will clear and the sun will rise,” Konkol said as rain and sleet began to fall on the crowd. 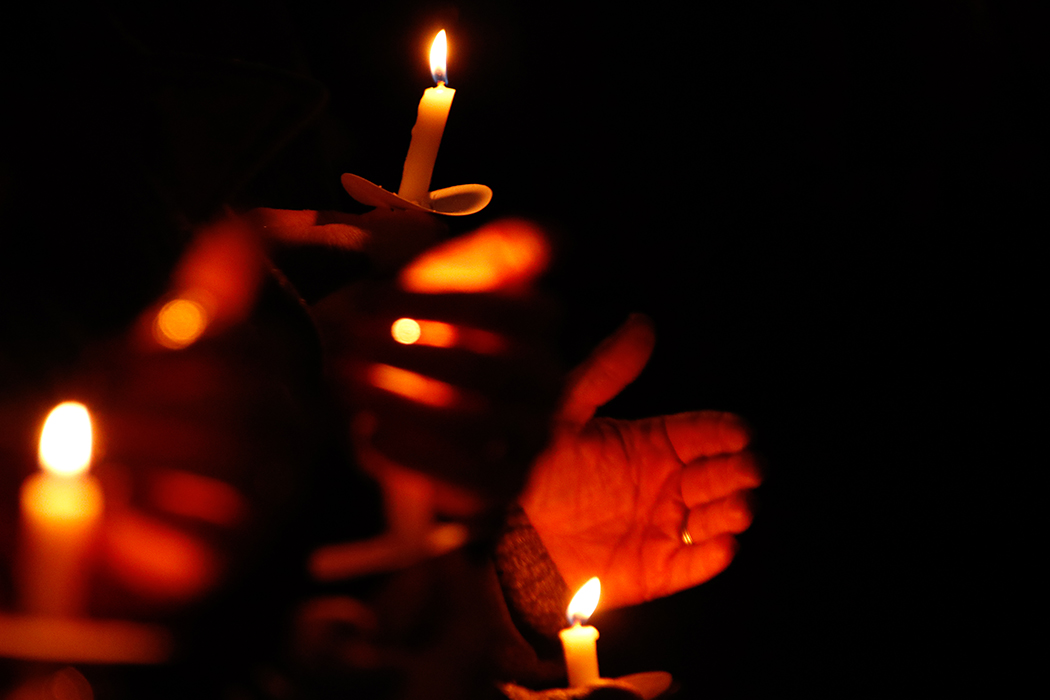 After Konkol’s opening remarks, religious leaders from the Syracuse community addressed the crowd. Michael Balanoff, president of the Jewish Federation of Central New York, urged the university to call out hate speech and said that hateful language has no place on campus. Pastor Phil Turner of Bethany Baptist Church commended Syracuse students for combatting racism and encouraged them to continue to speak out.

After a speech from a member of the Hindu Student Association, attendees lit their candles. Ashleigh Brown, director of the Black Celestial Choral Ensemble, sung to the crowd. Some of those in attendance joined her in singing.

Imam Amir Duric, Muslim chaplain at Hendricks Chapel, concluded the vigil by reciting a few verses from the Quran. After putting out their candles, attendees were invited into the Hendricks Chapel Noble Room for food and conversation.

Students expressed approval of the speakers’ condemnation of hate speech on campus after the vigil ended. But they also acknowledged the need for continued action by university administration to make SU a better place for marginalized students.

“I think the key is making sure people’s voices are heard. So once the concerns have been acknowledged, the promises have been made, let’s work on that,” said Charis Asante-Agyei, a graduate student at the School of Information Studies.

“Let us know those promises are being acted on, that progress is being made.”