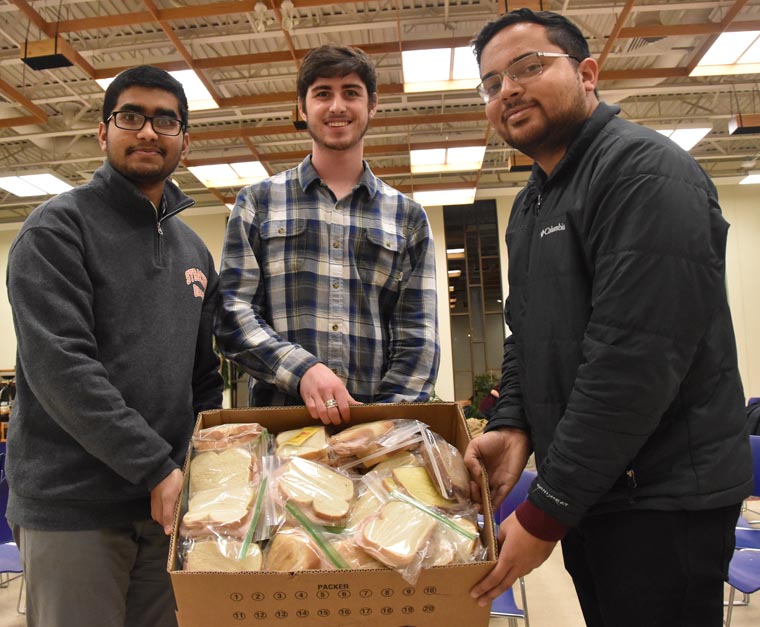 The peanut butter labels said Creamy. Supplying the crunch were the impending finals.

In the middle of the toughest two weeks on campus for studying, students from the three Abrahamic faith traditions nevertheless gathered Nov. 29 at the Syracuse University Catholic Center to dine together and to  make 460 turkey or peanut butter and jelly sandwiches for charity.

“To have them here tonight to be able to help the poor, to me, is a great blessing, because I know how stressed they are,” said Father Gerry Waterman, OFM Conv., the Catholic chaplain for SU and the State University of New York College of Environmental Science and Forestry.

The dinner offered regular meat loaf but also halal meat loaf for the Muslim participants and eggplant parmigiana for the Jewish participants who are vegetarians. “If we want to invite them, we have to be sensitive,” Father Waterman said.

Attendees included Rabbi Leah Fein from SU Hillel and Amir Duric from the SU Muslim Students’ Association (MSA). All the chaplains of the university gather every Wednesday and talk about working collaboratively, Father Waterman said.

How did people from the different faith traditions get along at the dinner and sandwich-making event?

‘SUCH A GOOD SPIRIT’

He “has such a good spirit of things,” said attendee Adrianna Calamita, a SUNY ESF junior from Rochester who is studying environmental education. She added that Father Waterman “wants people to be involved and that’s pretty great, especially in the age of being a college kid where this is a point where a lot of people either say yes to their faith or they say no.”

Of the interfaith dinner, she said, “This is really just a symbol of saying, Hey, we’re not going to discriminate, we’re all a family whether or not we believe this or this or practice this or that, we’re all one family, we all believe in something that’s important to us, and we all need to come together in a form of community and sharing with each other. Even though we have our differences, that doesn’t mean that we can discriminate.”

A member of the Jewish faith in attendance was Emily Simens, an SU junior from Long Island. She is studying information management and technology with a concentration in information security. This summer she will be working as a cybersecurity engineer at Cisco Systems in North Carolina.

Simens has been involved with SU Hillel since her freshman year. She is Hillel International’s David Project intern this year. “What I do,” she said, “is build relationships with other cultural groups. So I’ll get coffee with the president from MSA. I went out to brunch with a board member of the Catholic Center. I’ll meet with different leaders in Greek life, different multicultural groups. And so this is all in the spirit of building relationships between all the different groups.”

Tahsin Tahmid and Emily Simens attended the interfaith dinner Nov. 29 at the Catholic Center at Syracuse University. “It enhances my experience” to attend interfaith events, Tahmid says. Simens says she thinks that in the past few years, the interfaith community has become more tight-knit. (Sun photos | Tom Maguire)

IMPORTANT TO BE FRIENDS

She said Jewish people represent a small percentage of the world’s population. “We want to be inclusive and make allies with other people,” she said, “because you kind of need to do that. But I think interfaith and diversity work is really important on campus.” Overall, she said, “I would say our campus is pretty open-minded.”

She appreciates the efforts of the dean of SU’s Hendricks Chapel, the Rev. Brian E. Konkol, Ph.D. “The week he started his job,” she said, “he came to Hillel, he came to one of our board meetings, he went to all the different faiths.”

“It’s always important for us to actually be friends” with people from other faiths, said attendee Tahsin Tahmid, who graduated from SU in May but still supports the Muslim Students’ Association as much as he can.

Tahmid is originally from Bangladesh, a South Asian country. Then his family lived in New York City for six years before moving to Buffalo two years ago. He now lives in Syracuse and works as an electrical engineer.

Last year, Tahmid attended an interfaith night at which students watched the movie “The Sultan and the Saint.” “Beautiful movie,” he said.

“When I come to this event,” he said of sandwich-making night, “I can get to talk to them and get to know a little bit more about them in a way that actually enhances my faith also. … You can’t be ignorant right now.”

“Whenever I went to a Catholic event or a Jewish event,” he added, “I never had any discomfort. I didn’t feel uncomfortable going there thinking that they will hate our religion.” The interfaith community is “doing tremendous good work and it’s really beautiful,” he said.

“All the chaplains of the Abrahamic religions — Catholic, Muslim, and Hillel communities —  get along great,” said Jeremiah Deep, campus minister for the Catholic Center. “We have a real strong bond with them, and I think that trickles down to our students. They are very respectful of one another. … They practice a faith on a secular campus; that’s a huge thing that all these students have in common.”