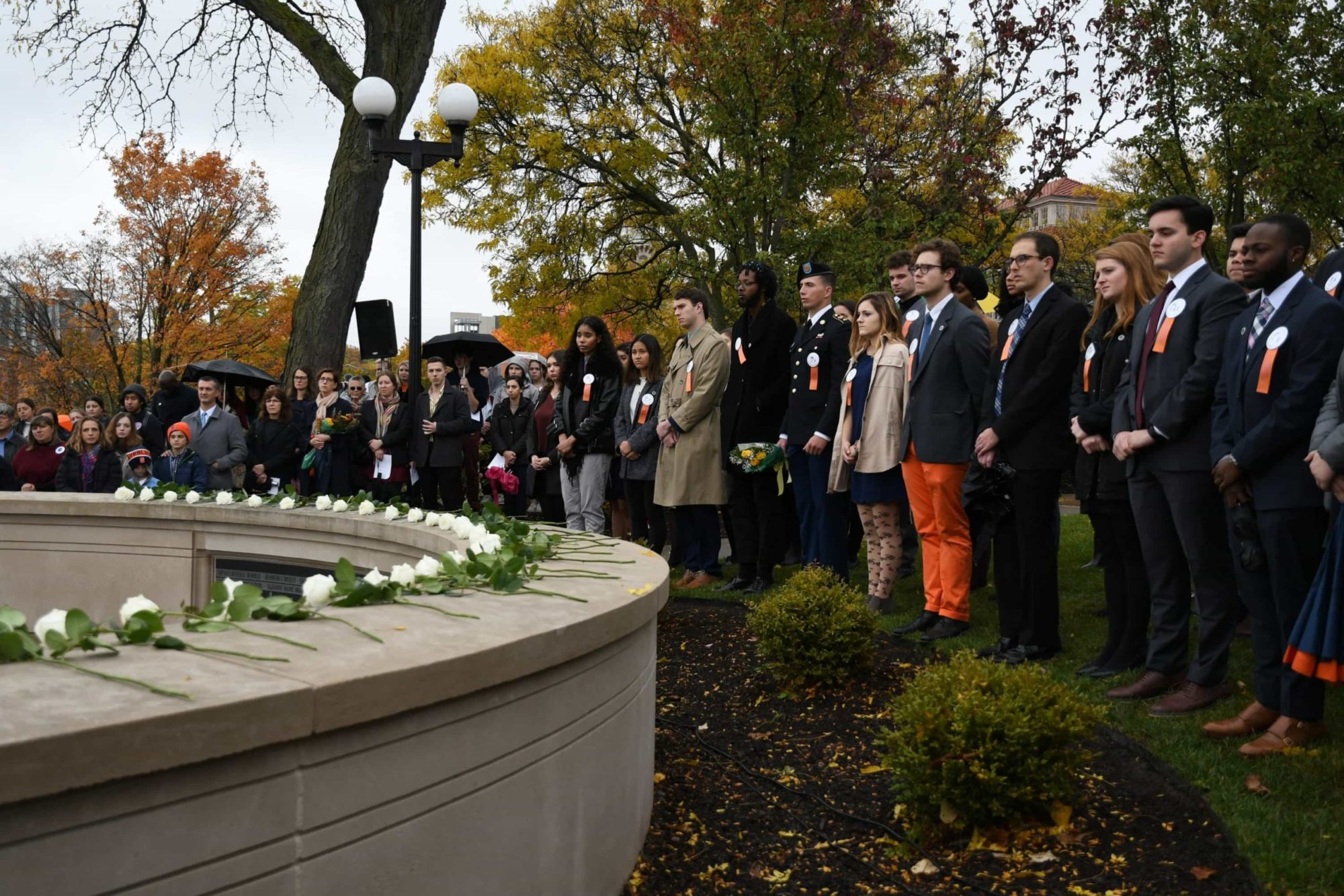 Passionate. Driven. Spirited. These are some of the words used to describe the victims of the Pan Am Flight 103 bombing Friday afternoon.

Hundreds of people gathered in the rain at the Place of Remembrance for the annual Rose-Laying Ceremony, an event at the end of Remembrance Week to honor the victims of the 1988 bombing of Pan Am Flight 103 over Lockerbie, Scotland. The ceremony commemorates the 270 victims, including 11 Lockerbie residents and 35 Syracuse University students who died during the plane crash. The event also honored 2002-03 Lockerbie Scholar Andrew McClune, who died in 2002 while at SU.

The Remembrance Scholars walked out of the Hall of Languages at 2:03 p.m., the same time the terrorist attack occurred on Dec. 21, 1988. They stood on either side of the Wall of Remembrance holding white roses while the Otto Tunes, a male a Capella group, sang “I am Home,” by George Kamel. Some scholars and members of the crowd shed tears.

Each scholar read a brief description of the student they represent ranging from their best qualities, passions and funny anecdotes told to them by the victim’s relatives and friends. Some of them were close to tears while paying homage to their student. They all finished by placing their rose on the Wall of Remembrance.

Lockerbie scholars, Brodi Chambers and Rowan Chrisholm paid homage to the 11 Lockerbie victims and Lockerbie Scholar Andrew McClune, who died during his year studying in Syracuse. They read a passage about him and laid a rose in his honor.

“When I found out what happened on the 21st of December, I was young, so I didn’t really understand the magnitude of the disaster. I feel this is because this doesn’t show on the surface of Lockerbie but in the people that were there to witness it 31 years ago,” Chambers said. “Our communities will always share an unbreakable bond through the pain and heartache of what happened, but this doesn’t stop us from making our own positive bonds through this tragedy and the friendships that will last a lifetime.”

Chaplain Amir Duric gave some closing remarks saying that the victims will always have a place in the heart of the community members. “If anyone saved a life, it would be as if he saved the life of all mankind. If anyone takes life to spread mischief on the Earth, it would be as if he took the lives of all humanity. Today, we remember 270 innocent lives as 270 humanities and we confess that these years have not diminished their place in our hearts.” Others, including relatives of the victims, were then invited to lay flowers on the wall while bagpipes played.

Junior Linzy Dineen said that remembrance week is the most important event on campus all year every year. “What’s so beautiful about it is that there is something so special about every one of the students and it’s a reminder that every person has a purpose and every life is so special. I always find myself hugging a little harder during Remembrance Week,” she said through tears.

Sophomore biology major David Harvey said his dad was good friends with one of the female victims. One of his dad’s friends had told him that 50 percent of the student body had gone to Hendrick’s Chapel the night of the attack to pray for the students. Harvey said there weren’t enough current students at the ceremony.

“I don’t think the magnitude of this is known by people who are here now,” he said. “Something like this has got to be remembered.”

Kara Weipz, sister of Pan Am 103 victim Richard Monetti, said that the ceremony gives her an “odd feeling” that is a combination of sadness and joyfulness of celebrating the students’ lives. “It doesn’t get any less sad. Loss is loss. Is it something that prohibits me from life? No. Does it prohibit me from letting my son go to college five hours away and have to take a plane to and from? No. It’s always there,” she said.

Julia Leyden, a former Remembrance scholar, said it was ‘surreal’ to be back a year later. The most special part of the program is getting to know different people in the Remembrance community.

“A community has formed around something inherently so tragic but we are able to make something that is so positive and create good change in their spirit,” she said. “Remembrance is something not just limited to scholars but that the whole campus can be a part of.”