Photo: Saadiya Sheekh-Nuur, a senior at SUNY-ESF, ties a ribbon to a tree outside Hendricks Chapel as an act of remembrance for the 50 victims of the shootings. [Corey Henry | Staff Photographer]

About 100 Syracuse University community members surrounded the steps of Hendricks Chapel on Tuesday evening for a vigil to honor the victims of the Christchurch, New Zealand shootings.

On Friday, 50 people were shot and killed in two Christchurch mosques by 28-year-old Brenton Tarrant of Australia. The vigil was organized by the Muslim Student Association, the Islamic Chaplaincy and Hendricks Chapel representatives.

The purpose of the vigil was to remember the victims and to call attention to Islamophobia, said sophomore Hamza Hamid, chief strategist for MSA.

“We can’t just leave it alone and not talk about it and forget it,” Hamid said. “People from different faiths and different backgrounds are coming to here to show that we stand together.”

Hendricks Chapel Dean Brian Konkol spoke first. He called the vigil an act of “intentional remembrance” for lives lost in the massacre. 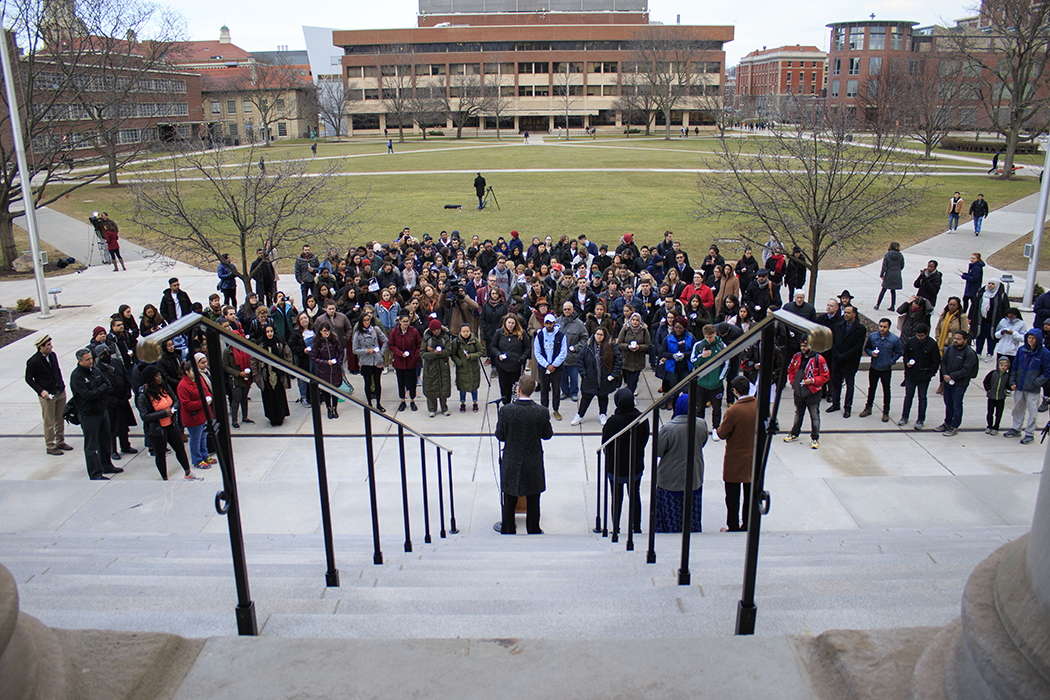 Konkol described the shootings as shocking and significant. He said the sadness he and the campus community feel comes from the vulnerability that many students experienced following the event.

“We know deep down that such hatred is by no means isolated,” Konkol said. “For far too many and for far too long, such hatred has been tolerated, accepted and even celebrated.”

Konkol said there’s solidarity on campus with SU’s Muslim community, which is “on the receiving end” of violence and terror.

Canab Sheekh Nuur, vice president of MSA, spoke next. She began by calling for the campus community to unite against hatred and violence.

She described her emotions following the event and said she’s angry with the media’s portrayal of the event by not focusing on the victims enough. Nuur said she does not feel hatred toward the attacker because her religion does not preach hatred.

She urged the audience to learn about different religions by visiting mosques, churches, synagogues and temples.

“The world would be a better place if we all learned from each other with compassion and love,” Nuur said.

At the end of the vigil, Konkol called for a moment of silence, and Hendricks assistants moved through the silent crowd lighting candles. People tied white ribbons to the trees outside of Hendricks — Konkol said the ribbons were “one last act of remembrance.” 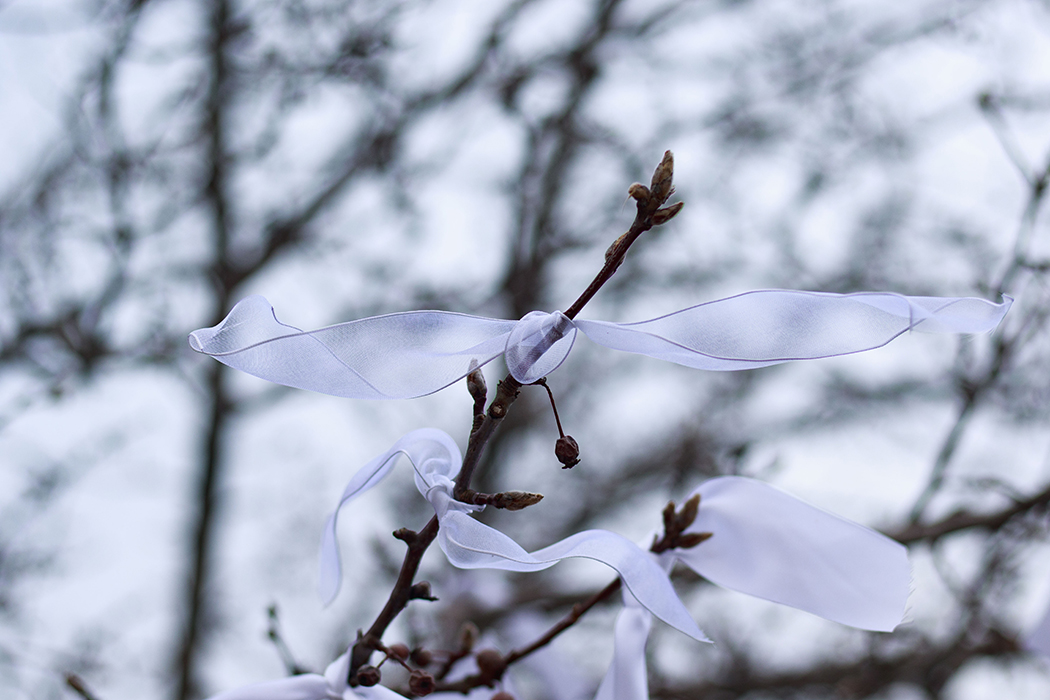 At the end of vigil people tied white ribbons onto trees in what Hendricks Chapel Dean Brian Konkol said was “one last act of remembrance.” COREY HENRY | STAFF PHOTOGRAPHER

Konkol, after the vigil, said that he was happy with the attendance, and that he was glad the campus community could come together and support all who were affected.

Senior Bee Poshek said being among a group of people during the vigil had a deeper impact on them than when they were reading about the massacre on social media or from different news outlets.

“There’s a sense of embodiment when you’re in a shared space where you can feel the emotion radiating over the group,” Poshek said.

Senior Dina Eldawy said the vigil gave her a sense of closure she had not felt since the massacre. She said it was a “sign of faith” that so many people attended the vigil.

“People are noticing and realizing that the Muslim community, which I am a part of, (is) also human,” Junior Lana Al-Khatib said. “We are under the same threat of terrorism. Terrorism has no religion, no face, no gender or skin color.”

Al-Khatib said she’s upset, but unsurprised by the massacre. She added that she’s happy to see Islamophobia become a more publicized issue. 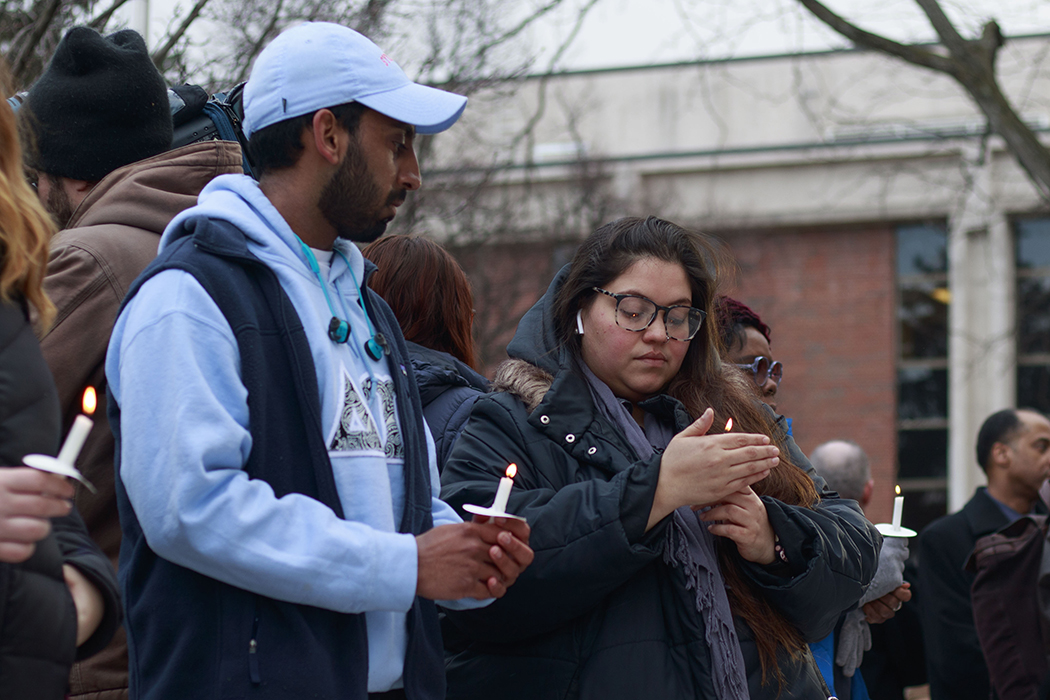 Muslim Chaplain Amir Duric said he has been trying to help Muslim students by providing a “safe space” for them to talk about how they were affected. Though no other events relating to the massacre are currently planned, he said there will be further discussion on the effects of and motive of the massacre.

During the vigil, Duric recited verses from the Quran. Dahabo Farah, treasurer of the Muslim Student Association, translated the verses into English.