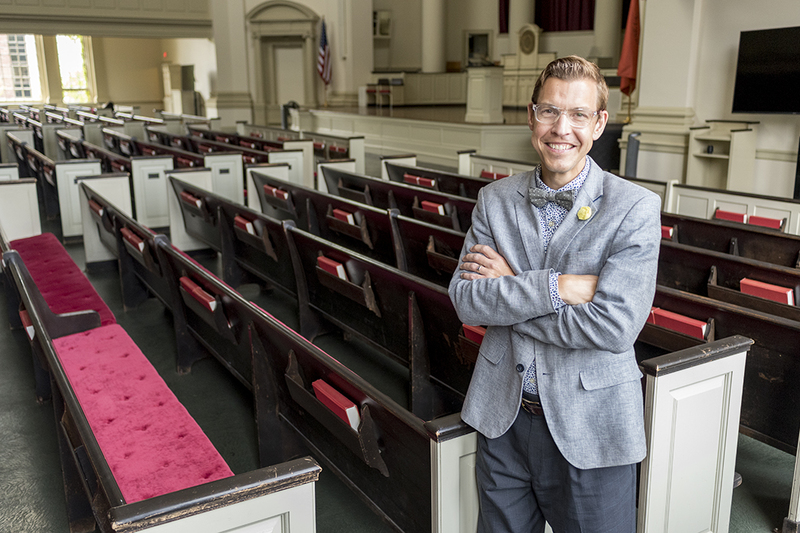 Brian Konkol was beginning to explain his new role at Syracuse University when the 6-year-old in his office approached him.

“Can I use those scissors?” he asked. Konkol’s son, Khaya, had been drawing nearby.

“Which scissors?” Konkol replied before getting up to look for them.

While searching for craft supplies may not be in the job description of the Hendricks Chapel dean, it’s still the kind of day-to-day work of Brian Konkol: father to Khaya and a 4-year-old daughter, Tobi. His wife, Kristen Tews Konkol, started teaching exercise science at SU this fall.

Konkol returned to his seat, unfazed.

It’s a role he’s still getting used to. Konkol was named the new dean of Hendricks in April after a strategic review of the chapel was conducted from March 2016 to September 2016.

The Hendricks Chapel Review Committee evaluated the chapel’s existing programs, facilities, staffing and finances while under the guidance of the interim dean at the time, Samuel Clemence.

The committee’s final report resulted in a new vision for the role of Hendricks at SU: to become more vibrant, visible and relevant to the spiritual needs of an increasingly nondenominational campus community.

The university has 10 religious chaplaincies, but Hendricks is also considered the spiritual center for nonreligious people. Catering to this multiplicity, one of the report’s recommendations is to expand diversity and inclusion programs.

Brian Konkol, an Evangelical Lutheran reverend from Wisconsin, is said to be just the man to strengthen the diverse spiritual roots of SU students.

“Dean Konkol is somebody who thinks really big about what spiritual and religious life on campus looks like today,” said Rabbi Leah Fein, of Hillel at SU. She was on the search committee for a Hendricks Chapel dean.

Fein said Konkol is in touch with who the students are and has an understanding of how religion fits into the university framework.

Amir Duric, the Islamic chaplain at SU, said Konkol wants students to understand the rest of the world.

“He wants students to be global citizens, but at the same time to keep their roots — and I think this something that can impact all students, including Muslim students as well,” Duric said.

For Konkol, being a spiritual leader wasn’t always the plan. Growing up in Amherst Junction, Wisconsin, a town with fewer than 1,000 residents, he always wanted to be a lawyer.

“For me, law was about setting up policies and practices to create justice and create societies that are fair for people to have opportunity,” Konkol said.

At Viterbo University, where he was a pre-law student, Konkol attended a lecture by a nun named Sister Helen Prejean. Her experience as a spiritual counselor to two death row inmates inspired the 1995 film “Dead Man Walking.”

“I had never in my life seen someone who articulated faith in such a profound, challenging and exciting way,” Konkol said.

Prejean was one of the influences Konkol credits with his eventually becoming a pastor in the Evangelical Lutheran Church in America. His first religious position was an internship with a parish in Guyana from 2003 to 2007.

Konkol then worked in an ELCA program for young adults in South Africa, where he earned a master’s degree in theology and a doctorate in philosophy from the University of KwaZulu-Natal.

It wasn’t until 2013 that he returned to the United States to take a job as co-pastor at Lake Edge Lutheran Church in Madison, Wisconsin.

Rev. Stephen Marsh was Konkol’s co-pastor there. Marsh said both he and Konkol clicked well and shared religion as the basis for their social justice.

“Brian understood how the world treated people of African descent, whether on their own soil or anywhere else around the world,” Marsh said. “He and I were a good co-pastor team.”

Marsh said Lake Edge was disappointed to see Konkol leave after one year for a position as a chaplain for Gustavus Adolphus College, a Lutheran institution in St. Peter, Minnesota.

In addition to his chaplain role at the college, Konkol was a faculty member in the Peace, Justice and Conflict Studies program.

According to the college’s website, 39 percent of its students are Lutheran and 36 percent are Christian. Unlike SU, it has no established chaplaincies for faiths other than Lutheranism.

Rebecca Bergman, president of Gustavus Adolphus, said that’s a limitation imposed by the college’s small size. But, she added, the college looks for the ability to work across religious when they hire chaplains.

“I think that Chaplain Konkol is one of those examples of a person who comes out of one faith tradition, but can reach across very successfully to be welcoming and understanding of all religions,” Bergman said. “Or none, for that matter.”

Konkol started contributing to The Huffington Post during this time, writing about topics such as consumerism, political conflict and a revival of religion in higher education.

As many have described it, Konkol has a gift for communication.

Chad Winterfeldt, who is cantor for Christ Chapel at Gustavus Adolphus, knew Konkol the four years he worked as a chaplain. Winterfeldt said his fashion sense was quirky but dependable.

“We could always count on him to be wearing a bow tie,” Winterfeldt said.

Students at SU can also count on seeing Konkol in his trademark look, but the dean opted for a more casual outfit — jeans and a polo — when he brought his son into work.

He said his job is about making faith services accessible and visible, fostering students’ personal resiliency and facilitating safe spaces where learning can occur.

Some of the duties, however, are on a much more personal level.

“Several times a week, I have students who will come into this office asking for emergency assistance, whether it’s food, helping out with books, whatever it might be,” Konkol said.

He said he tries to understand: “What were the systems and structures that lead to the situation that just presented itself?”

That way, Konkol said, he can then bring the issue to the attention of university leadership. The Hendricks Chapel dean reports directly to Chancellor Kent Syverud.

“Historically, Hendricks Chapel has been a nerve exposed to the pain of the campus community,” Konkol said. “So, in addition to being called the heart, I also would like to think it’s the ears.”