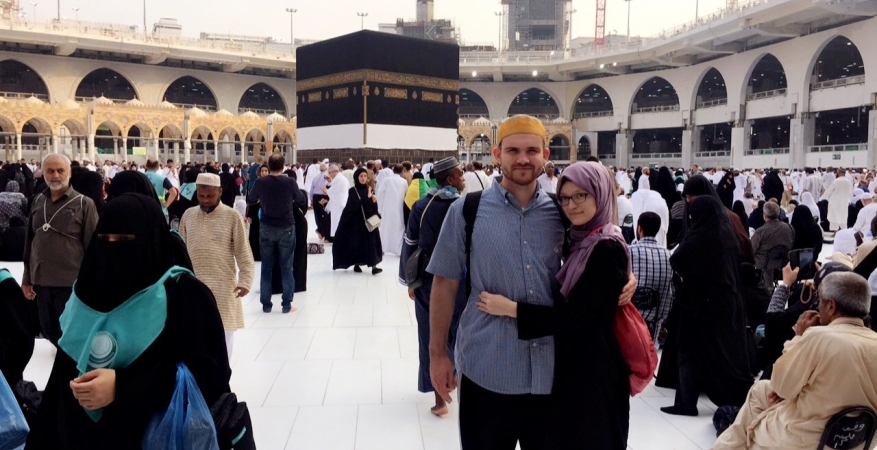 Amina Foco was standing at a cashier’s desk in a Saudi Arabian mall when the gates of the store came falling down suddenly. The strangers to her left and right stopped what they were doing and everyone in the mall began to form lines.

The call for prayer had just gone off during Foco’s trip to the mall in between the prayers and activites scheduled during her pilgrimage to Mecca, which Muslims call the hajj.

“It’s so much easier being Muslim over there than it is over here,” said Foco about the unspoken commitment to prayer in Saudi Arabia and the lackthereof in the United States.

A Pew Research study done in July found that 89 percent of U.S. Muslims said they were proud to be American and proud to be Muslim—while 70 percent said they still believed in the American dream despite their current place in society under President Trump’s administration.

Foco is one of 16,000 Muslim Americans to take the once-in-a-lifetime pilgrimage to Mecca this past month and to return to a country further divided. For some hajjis returning to America and catching up on Trump’s most recent actions—from his decision on the Deferred Action for Childhood Arrivals program, to the travel ban reinforcement—the American dream may seem less attainable.

Anel Hirkic immigrated to the United States with his parents when he was seven years old after winning a lottery that allowed his family to leave their genocide-ridden home of Bosnia. He just returned from the hajj and said he is hopeful that the American dream still lives on.

“We came here in 2001 chasing the American dream, and I think we’re well on our way there,” said Anel Hirkic, “We’re always chasing. That’s why it’s called a dream.”

People that have taken the hajj often struggle to find the right words to describe their experience. As one of the five pillars of Islam, the religious trip to the holy city of Mecca is expected of every Muslim once in their lifetime provided they can afford it and are in good health. The trip signifies the cleansing of one’s sins and represents rebirth as a new man or woman.

Hirkic said performing the hajj, surrounded by strangers speaking over 160 different languages has given him patience, perseverance and acceptance—all of which he has brought back with him to the United States.

The 22-year-old Liverpool resident said he has no doubts about the United States’s ability to become more accepting. Hirkic said the hajj is an equalizer. He said that there is no distinction between black and white, rich or poor—and that he believes the United States has and can operate with the same beliefs.

“I still think there is so much good,” said Omerovic. “We can’t let one time period right now define everything. I’d rather be here than anywhere else.”

Foco agreed that there is plenty to be grateful for in America but said she is worried about some things.

Imam Mohamed Elfiki, of the Islamic Society of Central New York encourages his congregation to think of the country in similar terms.

“I see what is going on around here as a blessing in disguise,” said Elfiki, praising the opportunity that has presented itself for many different kinds of people to work together and stand up for what they believe in. Elfiki mentioned his congregation’s participation in interfaith dialogues around Syracuse and several of his Muslim brothers and sisters volunteering to help those in Texas.

For people in his congregation who struggle with the divide between being Muslim and American or being an immigrant and American, Elfiki encourages his them to take pride in being an American citizen and to get involved in one’s community.

“This is home and you work for this home to the maximum capacity you can afford,” said Elfiki.

Amir Duric, the Islamic Chaplain of Hendricks Chapel agreed with the sentiment that one should take pride in being American, but also said it can be difficult when it seems like diversity isn’t being celebrated.

“Many people see this country as the fulfillment of their dreams,” said Duric in response to President Trump’s most recent decisions on DACA and the travel ban reinforcements. “Let us dream. Let people dream.”

Duric believes that people in America, both everyday citizens and those in power can learn something from people coming back from the hajj: acceptance.

When Amina Foco finished her prayer at the mall, the faces beside her began to look a little more familiar, said Foco. The people around her weren’t strangers after all. They were all people and they were all Muslims.

That’s the beauty of the hajj, according to Foco. There is no distinction and no discrimination.