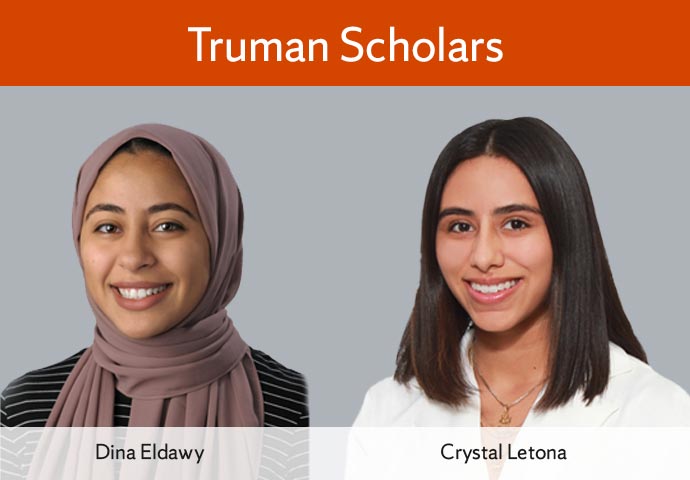 Syracuse University juniors Dina Eldawy and Crystal Letona have been named as 2018 recipients of the prestigious Truman Scholarship.

The Truman Scholarship was awarded this year to 59 exceptional college juniors in recognition of their community service, academic accomplishment and commitment to a career of public service. Eldawy and Letona were among 194 finalists selected from more than 750 candidates nominated by schools and colleges from around the country.

The Harry S. Truman Scholarship Foundation was created by Congress in 1975 to be the nation’s living memorial to President Harry S. Truman. Since its creation, the Truman award has become the premier graduate scholarship for aspiring public service leaders in the United States. The scholarship seeks to fund students who possess the leadership skills, intellect and passion that will make them “change agents” for the public good in any field. Recipients receive $30,000 to fund up to three years of graduate education leading to a career in public service. Winners also benefit from a network of other scholars and the opportunity to participate in professional development programming to help prepare them for careers in public service leadership.

Eldawy and Letona are the 12th and 13th Truman Scholars from Syracuse University since the program’s inception in 1975, and the first named since 2007. Both worked with the Center for Fellowship and Scholarship Advising (CFSA) on their applications and in preparing for their interviews.

“I can’t imagine two students better suited to or more deserving of the Truman Scholarship than Dina and Crystal,” says Jolynn Parker, director of CFSA. “Their drive, leadership, intelligence and true commitment to public service ensure that they’ll become exactly the kinds of ‘change agents’ the Truman Foundation seeks to recognize. The fact that two Syracuse students were chosen for this competitive award this year is a testament to our university’s focus on rigorous scholarship and engaged citizenship.”

The Truman Scholarship will give Eldawy the opportunity to continue to do something she loves—serving others. She has moved several times in her life, and visited family in Egypt each summer. Because of these experiences, she understands current issues through a global and intersectional perspective. “While many differences separate people around the world, I know that one unifying factor is that there are people making positive changes globally and locally, like in the Syracuse community, and I want to be one of those people,” she says.

Eldawy plans on making positive change in international development missions and foreign aid, particularly in the Middle East, and wants to work on education initiatives, especially for youth and women in countries like Egypt. “I believe that empowering the people and fostering civil society, instead of funding military governments, will have a greater potential for peace-building in the Middle East.”

“I can’t wait to see what Dina will do with this award,” says Carol Faulkner, associate dean and professor of history in the Maxwell School and Eldawy’s mentor. “She is the kind of public leader we need right now: thoughtful, sensitive and able to reach across social divisions to work with others.”

In the fall of her senior year, Eldawy will intern in Washington, D.C., through the University’s Maxwell in D.C. Program. “I’m excited,” Eldawy says. “I think it will be an extremely important step for me to explore what I want to pursue in graduate school.”

Letona wants to address the racial and class disparities in reproductive and sexual health, particularly among low-income women of color. She plans to pursue a dual degree program in law and public policy or administration and eventually wants to run for City Council of Los Angeles.

Growing up in a predominantly Latino community in Los Angeles with a single mother and a sister, Letona says she never really considered a job in public service, especially because there weren’t many people who looked like her holding public office. That changed when she worked on a mayoral campaign in Los Angeles and was inspired by her candidate’s efforts.

Letona has volunteered within the Syracuse community through different organizations on and off campus, such as Students Advocating for Sexual Safety and Empowerment (SASSE) and Planned Parenthood. During the summer of her freshman year, she interned in the Office of the Los Angeles City Attorney, working with the diverse residents of Los Angeles through community engagement and outreach.

“My public sector experiences, along with my time at Syracuse University, cemented my decision to pursue a career in public service,” Letona says.

Letona is particularly passionate about promoting sexual health, family planning and reproductive rights. She comes from a culture where many people face reproductive obstacles as a result of systematic barriers, including poverty, racism and lack of insurance. “I want to make comprehensive sex education and quality healthcare available to all women, especially Latinas within low-income communities, because they need the ability to exercise self-determination, including making decisions about their reproductive lives.”

William Coplin, professor of public affairs and director of the Public Affairs Program in the Maxwell School, says Letona is well suited for a career in public service. “Crystal has been an outstanding student academically, but more importantly an energetic leader of several groups working on the campus and in the community.”

Letona is currently studying abroad in London. In her senior year, she plans to apply to graduate school, and to serve as the president of SASSE on the SU campus.

Eldawy, Letona and their fellow 2018 Truman Scholars will gather May 22 for a leadership development program at William Jewell College in Liberty, Missouri. They will receive their awards in a special ceremony at the Harry S. Truman Presidential Library and Museum in Independence, Missouri, on May 27.