After the death of Mahsa Amini, Iranian youth are taking their fight to the streets 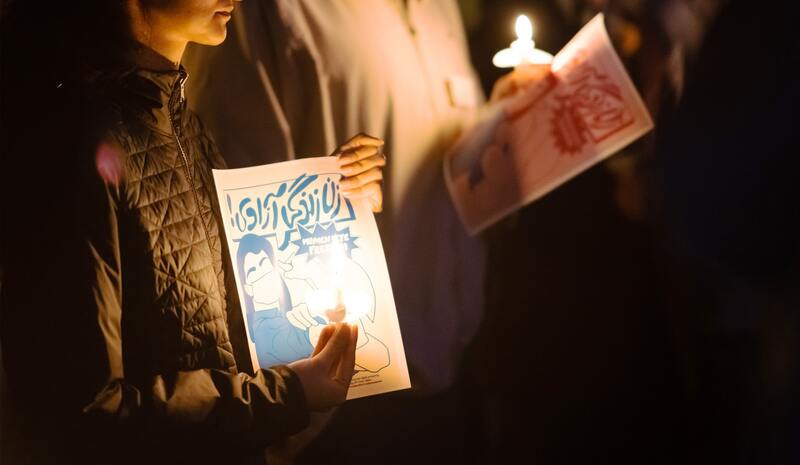 Four weeks following the death of Amini, the Iranian people are still persisting even with arrests, death, destruction and tragedies. The only foreseeable outcome in Iran is change.

Four weeks after Mahsa Amini’s death, Iranians are still marching the streets to not only protest Amini’s death but to object to soaring prices, high unemployment rates, corruption and oppressive laws against women.

After the Iranian revolution in 1978-79, a new idea of nation was established — the Islamic Republic of Iran. With that change, a new law was put in action: all women will wear hijabs that cover the head and neck while concealing the hair.

Amini’s death was “the straw that broke the camel’s back.” It was the spark that awakened the people.

Although there have been many protests and eruptions post Islamic revolution in Iran, Amini’s death has incited a revolution within the Iranian people where people are not backing down. These protests and demonstrations are different because it’s young adults and teenagers that are leading and taking their anger to the streets.

Iranian university students, who often feared education bans, are now protesting in the streets and their schools in Isfahan, Kerman, Mashhad, Tarbiz, Tehran and many more places across Iran. Tear gas has been fired and students were chased and beaten by security on campus. Moreover, there have been 30-40 students arrested for their simple “crime” of protesting, further proving that, in Iran, freedom of opinion is a punishable act rather than a basic human right.

Nonetheless, Iranian women who were forced to wear the hijab in fear of morality police have started taking it off, waving and burning it in protest.

In 1979, people chanted for independence and freedom. Now, the nation is uniting and chanting in favor of bodily autonomy. They are protesting in the name of Amini and the name of countless others who have died from unnecessary reasons from the Iranian government. According to university students, this isn’t a protest anymore — it’s the beginning of a revolution.

The riot police have not been democratic. According to the Human Rights Watch, 16 videos depicting police’s use of excessive force have been verified in 13 cities across Iran. As of Oct. 5th, there have been over 185 civilian deaths – 19 of which were children. Those children would have led a life of success but instead were robbed of it by a force that seems to have empathy for no one.

In a video shared on Twitter, a man yelled: “Don’t hit my wife, she’s pregnant.” In that same video, the wife can be seen as she is dragged by multiple riot officers, screaming, “Allah is sufficient for us and He is the best disposer of affairs,” pleading God for help.

The people of Iran are ready to fight back for their basic rights and as global citizens, so should Syracuse students and residents. However, Iranians are currently facing internet black-outs, preventing them from fully accessing the world. According to CNN analytics, these black outs are also believed to be caused by the government.

It is on us to help them and even students at SU can make a difference. Here’s how:

First, donate to the Human Rights Watch or your Iran relief organization of your choice. Your money will go towards holding perpetrators accountable and helping survivors.

Second, reach out to national and international sources to educate yourself more about the situation in Iran. Donate your time and knowledge towards making sure others know why our voices here matter too.

Third, follow the event, not the trend. Make sure not to fall in the cycle of only following news when it’s trending. A matter that trends for a few days may be still happening for months, it’s just not talked about anymore.

Fourth, remember the martyrs. Remember their sacrifice for the sake of others’ liberation. Remember the children that should have never made it to the death count. Remember their families, who will without their loved ones but carry on their names and stories for a lifetime.

Four weeks following the death of Amini, the Iranian people are still persisting even with arrests, death, destruction and tragedies. Even with the brutal police violence, the voices of the people are getting louder. Their voices are heard from international governments and the people in different countries are joining the cause. This time, Iranians are fighting till the end; This time, the only foreseeable outcome is change. May the martyrs’ blood fuel their cause and may Iranians get their long needed rights.