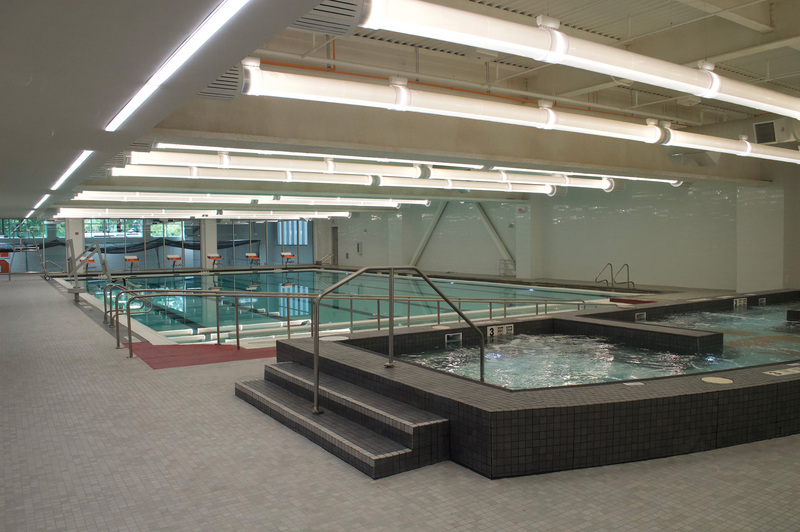 The students hope to have separate swim hours at the Barnes Center’s pool or Sibley pool at the Women’s Building to observe their religious practices.

Editor’s note: The names of sources in this story have been changed to protect privacy. Instances in which a name was mentioned have been replaced with (Student A), (Student B), etc.

Syracuse University student (Student A) never learned how to swim. When (Student A) arrived at SU, (Student A) was excited to learn, but quickly discovered The Barnes Center at the Arch’s pool is not accessible to Muslim women like herself.

“I’m not able to exercise. I’m not able to have fun in the pool, or even learn how to swim,” (Student A) said. “As Muslims we have to cover, and when we’re in a swimming pool, obviously we’re not covering, so there can’t be any men.”

Covering, or maintaining modest dress for religious reasons, is at best uncomfortable and at worst impossible for Muslim women who choose to cover their bodies when they’re using Barnes Center facilities, such as the pool. Muslim students told The Daily Orange that SU lacks proper accommodations for them, especially in gyms and pools.

(Student B) and (Student C), both graduate students and two of the roughly 300 members of the Muslim Student Association, have wanted to swim in SU’s pools since they arrived on campus, but have not been able to.

Growing up in Malaysia, (Student C)’s school had separate pools for men and women, so (Student C) felt comfortable swimming there.

“Usually I’d have to fix my scarf while I’m in the pool, but if you’re in an environment where it’s just girls, you don’t really care and you can swim,” (Student C) said. “You’re more comfortable.”

(Student D), a member of the MSA, researched workout options prior to committing to SU. (Student D) said they was excited to use the Marshall Square Mall Fitness Center because she had heard it was less used than other gyms in and around campus, making her more comfortable with the idea of working out there. (Student D) said the gym closed before they arrived on campus.

(Student C) mentioned feeling uncomfortable when wearing her hijab at the gym, recalling getting “weird stares.”

(Student B) said the Barnes swimming pool should allocate a specific time for Muslim women to use the facility. Her request isn’t anything new.

In 2005, some public pools in Seattle accommodated Muslim women by holding monthly swim days for women-only where the windows surrounding the pool were covered by cardboard. In 2012, a San Diego YMCA introduced female-only swimming classes to better include Muslim women. A YMCA in Chicago created a womens-only workout night in 2020 to give religious women a space to exercise.

But even with specialized hours, using the Barnes Center’s facilities may not be possible for some students. (Student A) and (Student D) said the glass windows and doors looking into the pool are another obstacle in their efforts to make the area accessible to Muslim women. (Student A) suggested installing curtains to block the windows, and prevent men from seeing women swimming.

(Student F), a freshman in MSA, believes solutions to the issue will benefit all female students at SU, not just Muslim women.

“I’m sure it’s not only Muslims, I think there’ll be a lot of female students that would benefit from it because not everyone is comfortable with all genders swimming (together),” (Student F) said.

(Student E) said Sibley pool at the Women’s Building, which is less exposed than the Barnes pool, could be a perfect solution. Since less people use the pool, the university could easily block out specialized hours for students, (Student E) said.

The university is open to connecting with Muslim students about the issue, and provide better accommodations, said Sarah Scalese, SU’s senior associate vice president for communications.

Still, (Student E) believes the problem with accessibility at SU is bigger than just pool access.

“We are very underrepresented,” she said. “Even with faculty, I think a lot don’t know the Muslim accommodations they should have for students.”

(Student A) said if SU kept an open dialogue with its Muslim students, they wouldn’t have as many issues with pool access. She suggested administering a survey to ask Muslim students what they feel SU is doing right and where they should improve.

While SU encourages inclusion and diversity, (Student A) said diverse communities such as Muslim women still face obstacles and restrictions on campus.

“Sometimes there is no inclusion,” (Student A) said. “But there is diversity because we’re here.”