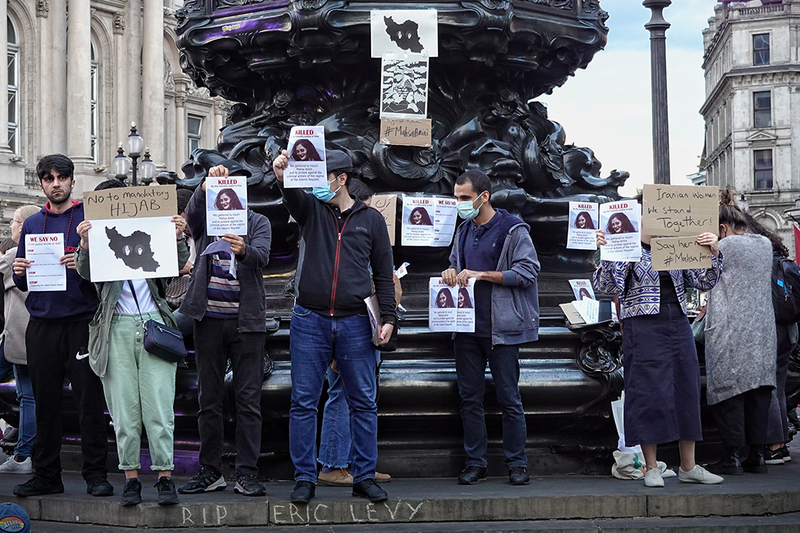 Following the death of Masha Amini in Iran, people around the world must unite and fight against the oppression that Middle Eastern governments continue to inflict.

Mahsa Amini, a 22-year-old Iranian, died in custody after she was arrested for allegedly “violating Iran’s hijab and modesty law.” Amini was arrested on Sept. 13 and passed away on Sept. 16th. Iranian officials claimed that she died due to a heart attack. Amini’s parents said she never had any health conditions before her “heart attack” and has always been in good health.

The hospital Amini was transferred to released a statement that she was brain dead upon her arrival to the hospital, but later revoked the claim. Witnesses claim that she was beaten up and her brother even noticed bruises on her head and legs. Moreover, activists have released medical scans of Mahsa’s skull, showing brain edema and hemorrhage.

Growing up in Egypt, I was raised in a Muslim community with a very religious family. Ever since I was a child, my family encouraged me to wear the hijab. But I was given the option, so I was never forced to actually wear it. I have proudly been a hijabi by choice since I was 12 years old. In seven years of wearing the hijab, I never felt I would be in actual danger if I had chosen not to wear it.

But unfortunately that is not the case for women in Iran. There, women must dress in a full coverage outfit, not because they want to, but because they fear the repercussions of not wearing it.

Personally, I never understood the idea of the so-called “morality police”. What morals encourage people to violate and abuse people? What morals allow the restriction and free opinion of an entire nation? What morals allow for a beating of a woman for not wearing what was “acceptable” to her government?

The fact that they use the name of Islam as reasoning for their actions disgusts me. They fabricate the religion to their desires. If we are talking Islamically, there is a verse in the Quran that reads: “There shall be no compulsion in the religion” (2:256). Moreover, Islam has proven itself to be peaceful and accepting in its verses and practices. But when it pleases governments like Iran’s, they weaponize the name of religion to use it as a front for their sick actions.

Following Amini’s death, protests erupted all around the nation, starting in Tehran. Women and men marched in the streets and waved their hijabs in solidarity with Amini. College students, who were usually afraid to raise their voices so as to not be banished from education, are now protesting in their schools. Omid Djalili, a British-Iranian, said “This is Iran’s George Floyd moment” in an online video. Because of Amini’s death, it is believed that Iranians have had enough, and the hijab protest might burst into an anti-government revolution.

The other tragic part about Amini’s death is that the rest of the world seems to not care to learn about it. In the west, we have normalized the oppression of Middle Eastern Nations by their rulers, and news like Amini’s never get enough spotlight. We need to do better. Every man, woman and child deserves to be heard.

I mourn for Amini. I mourn for her violent death. I mourn for the three days of hell she has faced. I mourn for her rights that were violated and for her life that was taken away because of the cruelty and control of her government. I mourn even more for the fact that Amini is one of the millions of people going through governmental oppression. Millions have to fear for their safety walking in the street because of what they are wearing, whether that be in France, Denmark, the Arab countries or the rest of the world.

I believe Amini is a martyr. She is a martyr of her nation and her religion. Even though the media may start forgetting about her, I am sure that many will live to fight against oppression in her name and the names of the many more people that have also been affected.